We the cadet of the national cadet corps, do solemnly pledge that we shall always uphold the unity of india. We resolve to be disciplined and responsible citizen of our nation. We shall undertake positive community service in the spirit of selflessness and concern for our fellow beings.

National Cadet Corps is a Tri-Services Organisation comprising the Army, Navy and Air Force, engaged in grooming the youth – ‘The Leaders of Tomorrow’ – into disciplined and patriotic citizens.

Genesis
The genesis of the NCC can be marked out back to the First World War. The Britishers created the University Officers Training Corps (UOTC) as the second line of defence in 1942 but during World War II, the UOTC didn’t match up to their expectations. This led to the idea that a better method should be employed to have a large pool of trained youth men even during peace times who would be available for employment into the Armed Forces. On the recommendations of a committee headed by Pandit H.N. Kunzru, the idea of establishing a cadet organization in schools and colleges at a national level was accepted and after independence, the present day NCC under the Ministry of Defence came into existence on 16 April, 1948 through NCC act XXXI, 1948. NCC was formally inaugurated on 15 July, 1948 as soon as the schools and colleges reopened after summer vacation. A year later, the Girls Wing of the NCC was started in July 1949. In 1950, Air Wing was added on 01 April with one Air squadron each at Bombay and Kolkata. The Naval Wing of the NCC was raised in July 1952, thus completing the true representation of all services in the Corps.

The Aims of the NCC were laid out in 1988 and they have stood the test of time and continue to meet the requirements expected of it in the current socio–economic scenario of the country. The aims of NCC are as follows:

Based on the aims of the NCC, the Organisation has laid down Training Syllabi for the cadets. The syllabus for the Junior Division Cadets covers a period of two years and for Senior Division it is three years. Except for minor variations, the syllabus is similar for both Boy and Girl cadets. The training schedules planned for the cadets ensure that the benefit of the organisation reaches the maximum number of cadets. The training activities include Drill, Shooting, Physical fitness, Map Reading, First Aid, Gliding/Flying, Boat Pulling, Sailing and camp training cover basics of military training in Army, Navy and Air Force. This training is mostly carried out in schools and colleges by the cadets. This is the most important aspect of NCC training and hence great emphasis on institutional training is given.

NCC has adopted community development activities with the aim of imbibing amongst cadets selfless service to the community or need to protect the environment and to assist weaker sections of the society in their upliftment. These are following social service activities in which cadets participate:

The interested candidate can apply to NCC through Care Taker Officer of NCC in the College.

50 students including 11 cadets participated in the events. The theme was “Atulya Bharat”. NCC cadets bagged prize in rangoli making competition.

The cadets of NCC (SW) of the college actively participated in Prabhat Pheri (Tiranga Rally) on 12th August 2022 along with NSS and R&R volunteers. The rally started from the college campus, traversed through the city and ended at Shahid Smarak near mini secretariat Paonta. SDM Sh. Vivek Mahajan and social activist Sh. R.P. Tiwari were the guests who addressed and motivated the students at Shahid Smarak.26 cadets participated in the program.

The cultural celebration on account of Independence Day was organized by the NCC, NSS and R&R units of the college on 13th August 2022. 21 cadets participated in the program.

20 cadets particiupated in the parade ceremony.

20 cadets participated in the Parade ceremony in the gurudwara ground.

The online/ offline enrolment procedure was initiated by NCC (SW) of the college for first year girls in session 2022-23 till 18th August through google form and onspot registration respectively. It was followed by pre-selection ground practice daily till 23rd August 2022. Girls were short-listed on basis of height, %age in 12th and stamina in the ground practice including drill etc.

On 23rd Aug, PI staff Sh. Sohan Singh did the final selection and 27 girls were selected for fresh enrolment 2022-23.

NCC, NSS and Red Ribbon Club conducted collectively a poster competition on the theme “ Intergeneration Solidarity: creating awareness for all ages” on 16th August 2022. 4 cadets participated in the competition.

NCC (SW) of college organized “Swacchta Abhiyan” under the aegis of “Puneet Sagar Abhiyan” on 27th August 2022. In this, 50 NCC Cadets collected plastic waste within the college campus and the surrounding areas.


Cleanliness Drive in the College Ground on 14th October 2022

In accordance to the orders received from 1 HP (G) Bn, Solan, a digital pledge on “Lifestyle for the Environment” was taken by 39 cadets to consciously participate in taking up environmental lifestyle and inculcate long term environment friendly habits.

The NCC unit along with NSS unit of the college initiated a cloth donation drive in the college named “Season of Giving” from 9th Nov, 2022 onwards. The cadets collected clothes from the tachiing, non teaching faculty members and students and donated them in the slum area in Kunja. All the cadets actively participated in the activity.

The SUO Tiya Kumari of NCC (SW) of the college participated in the Pre-RD Camp from to 2022 at Indus International University, Una.

In accordance to the orders received from 1HP (G) Bn Solan, the NCC (SW) cadets celebrated Communal Harmony Week as directed by the National Foundation for Communal Harmony and collected funds. A total of 45 cadets participated in the programme. Cadet Kajal Pal gave a power point presentation on the role of NFCH in spreading communal harmony and its financial contribution in resettling of children who are affected by communal riots.


Development of SWAYAM PRABHA VATIKA from 15th to 26th November 2022

The NCC Cadets of SGGSJ GC Paonta Sahib developed a green area in the college campus by clearing weeds, levelling of land and beautification by plantation and painting of stones, bricks and tree trunks. All the cadets participated in different camps organized from 15th to 26th November 2022.

The NCC Cadets made a contribution of Rs. by distributing stickers of Jhanda Diwas in the college premises and sent to from the college.

The NCC (SW) cadets of SGGSJ GC Paonta Sahib organized an Anti Drug Awareness Drive in the college campus in which the cadets made the students aware about drugs and its impact on the society. They also discussed about the preventions and curative measures that can be taken to prevent the menace of drugs.

The NCC cadets represented the college in Parade and Naati Dance in the Republic Day Celebration conducted at the administrative level in Paonta Sahib.

The annual athletic meet of GC Paonta Sahib was held on 25th Feb 2022 in the college ground. The programme started with a march past by NCC, NSS , R&R and Physical Education. The NCC cadets individually also participated in various athletic activities. 25 cadets participated in the athletic meet.

A disaster management awareness program was conducted by NDRF on 8th April 2022 in the college campus.Asstt. Commandant Sh. Sagar Singh Pal was the Chief Guest. They conducted Mock Drills for different types of disasters amd also exhibited various modern equipments of rescue work during any sort of disaster. 26 cadets participated in the activity.

The NCC(SW) cadets of 2nd and 3rd year of SGGSJ GC Paonta Sahib registered on ‘Har Ghar Tiranga’ portal and pinned flags and uploaded selfies with Tiranga. 26 cadets received certificates for the same. 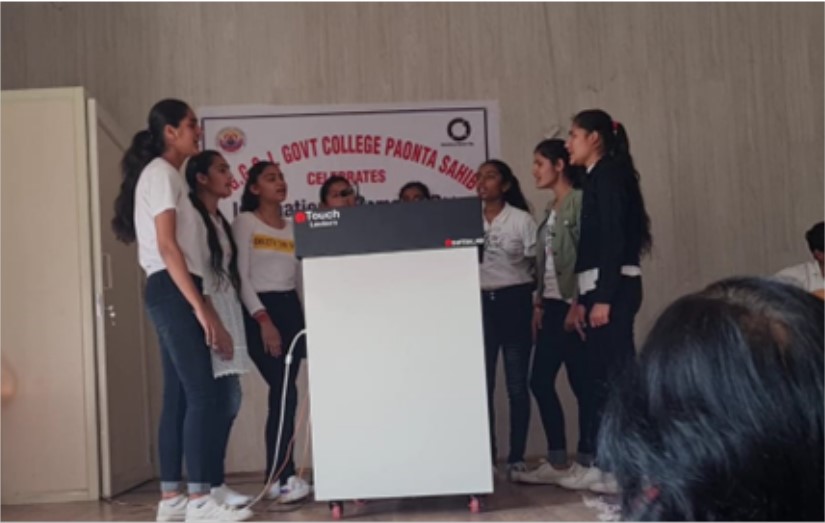 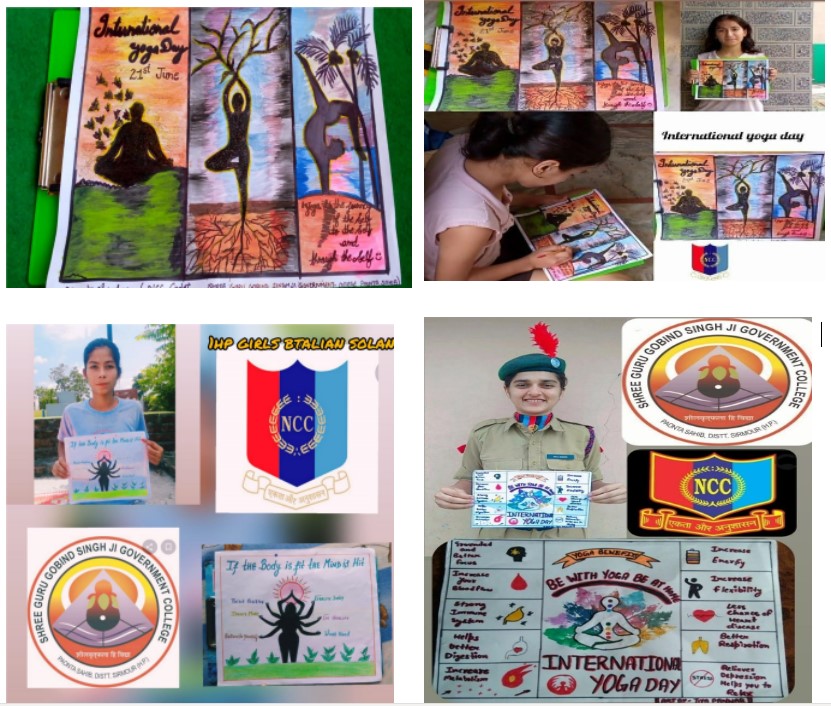 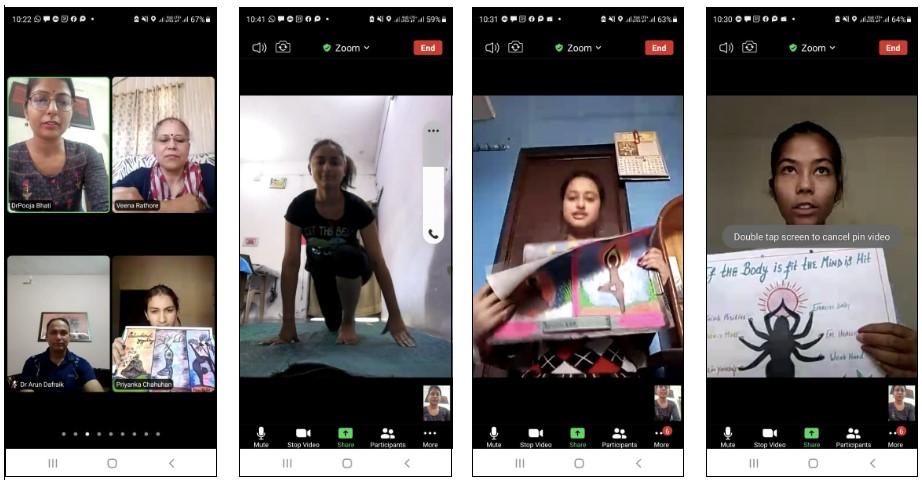 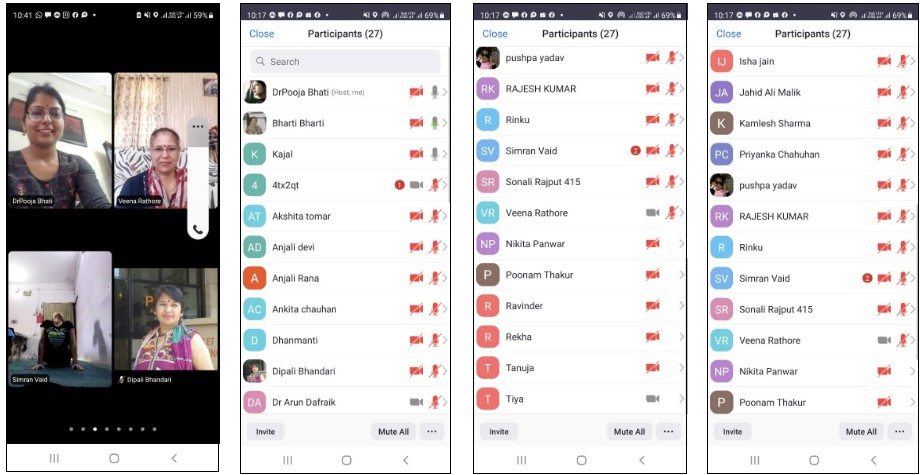 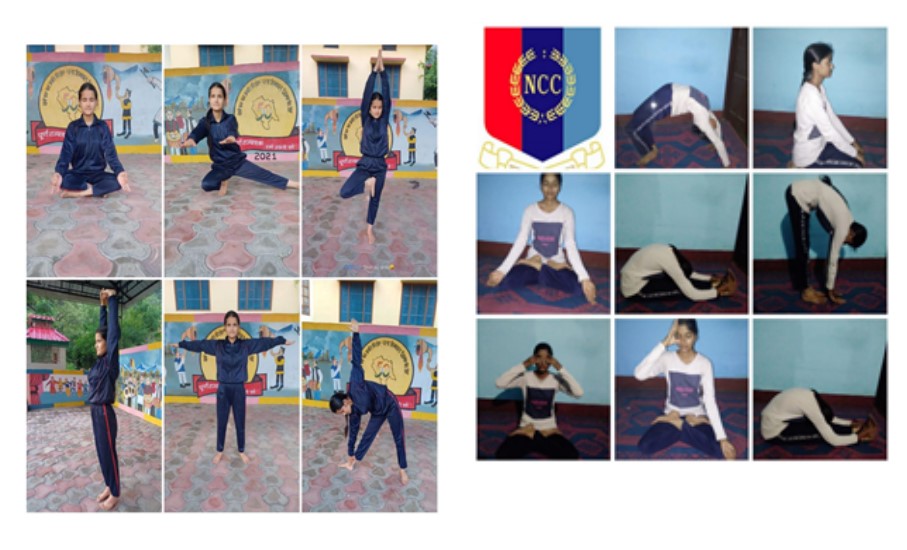 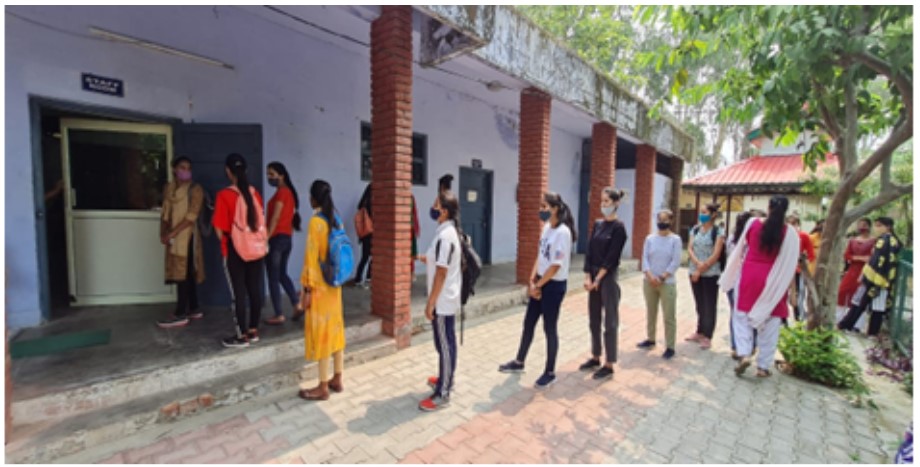 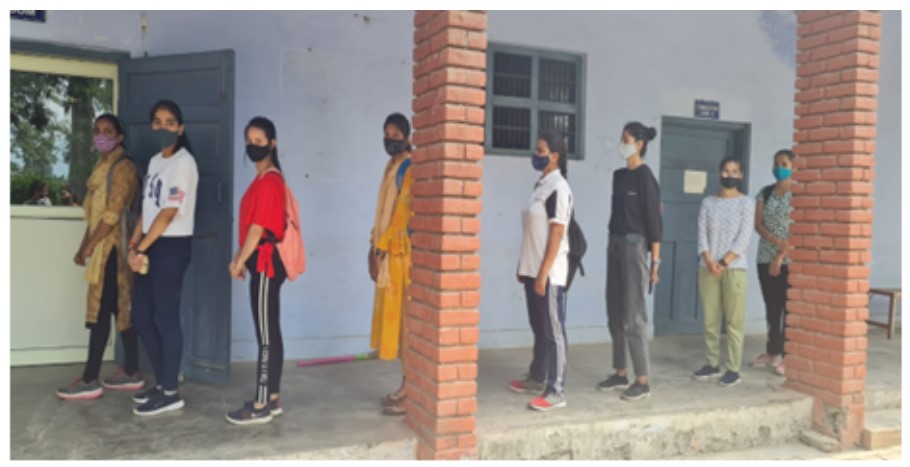 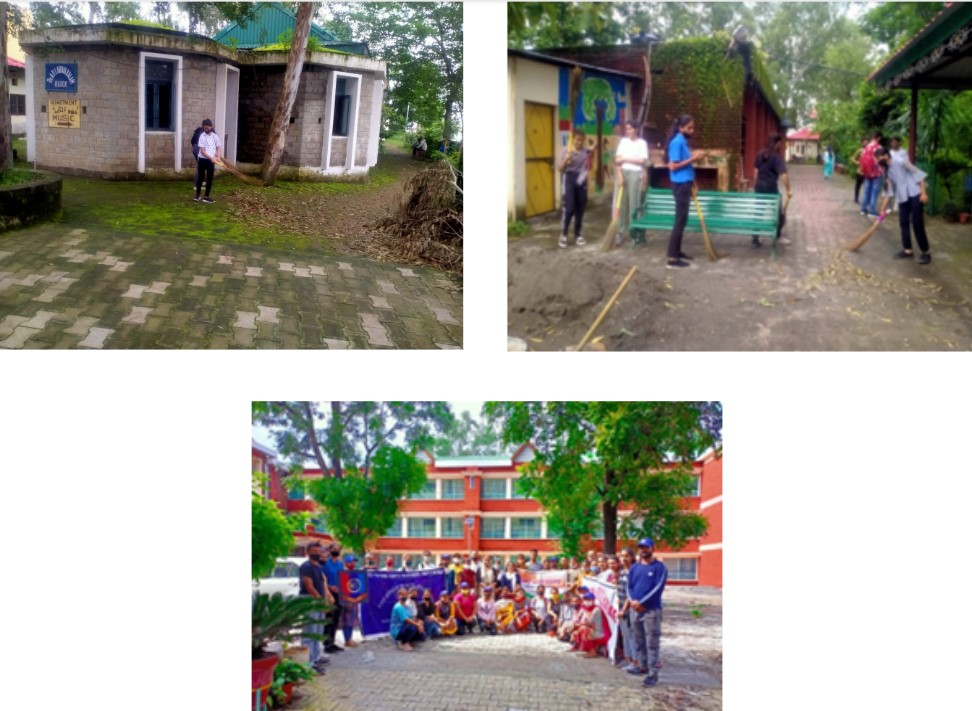 Poster making competition and rehearsal of parade on 9th August 2021
Poster making on theme “Bharat Ki Azadi” was organized and NCC cadets participated in the programme. 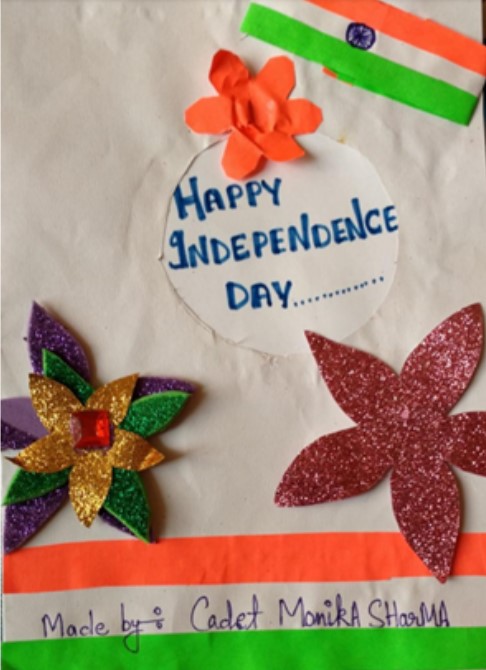 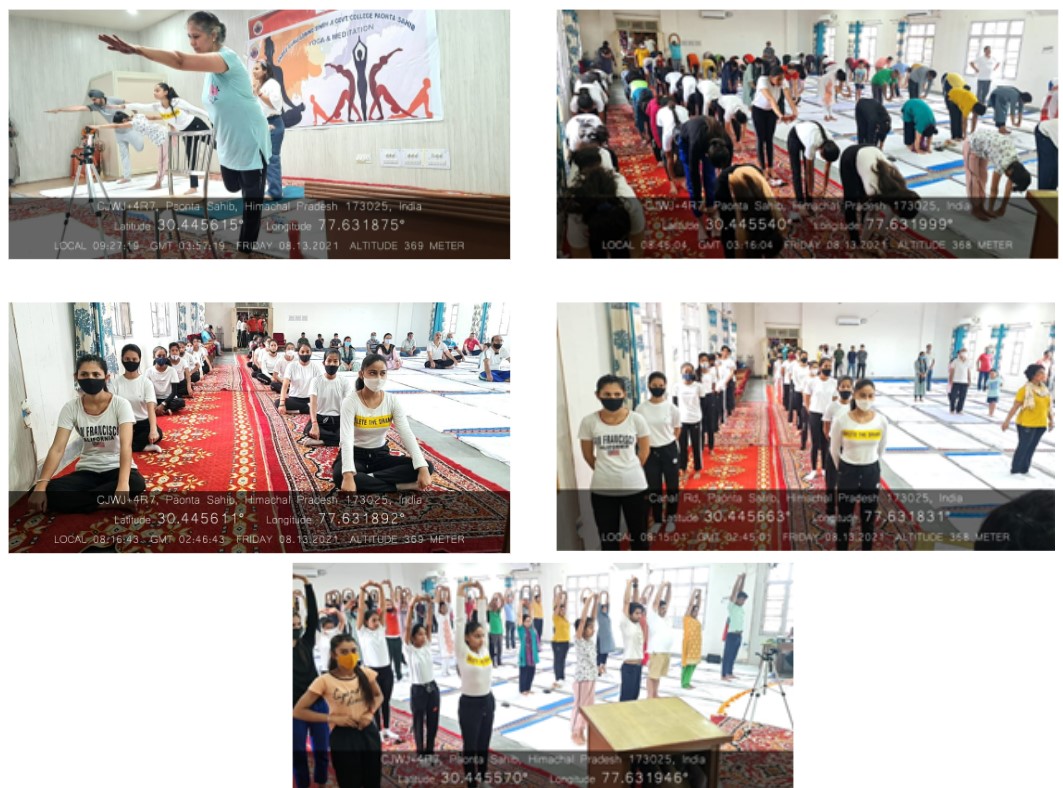 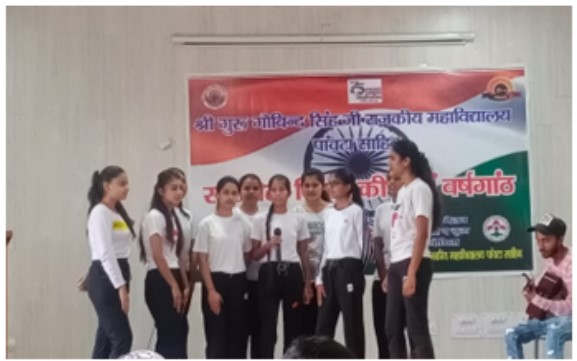 As per the decorum of Independence Day, a “National Flag hoisting” by worthy Principal of the college and Parade ceremony and salute to national flag was carried out by NCC cadets. 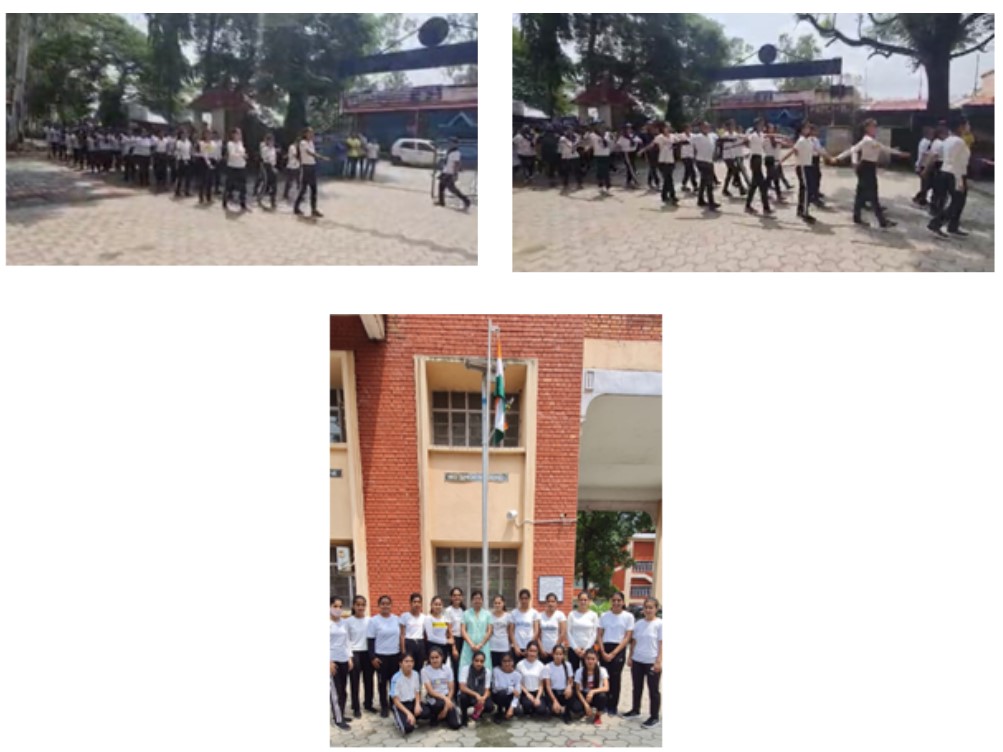 NCC cadets diligently participated for 7 days and on 9th Sept., 2021, final drill test was done in the college for “UO” selection and cadet Tanuja was given the rank of “UO”. 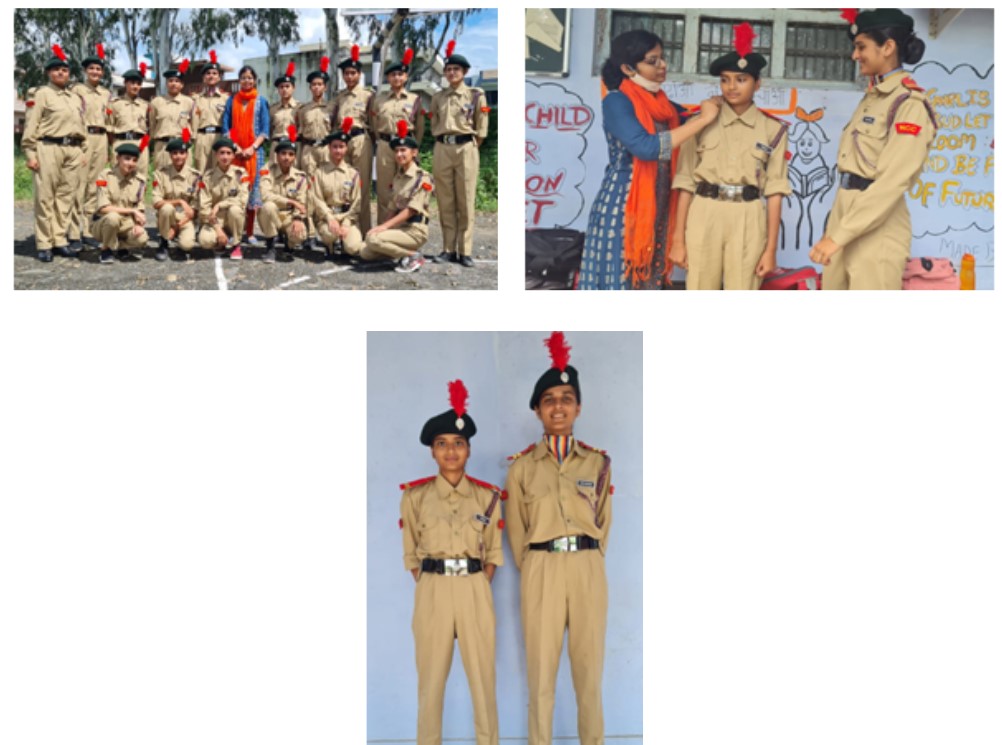 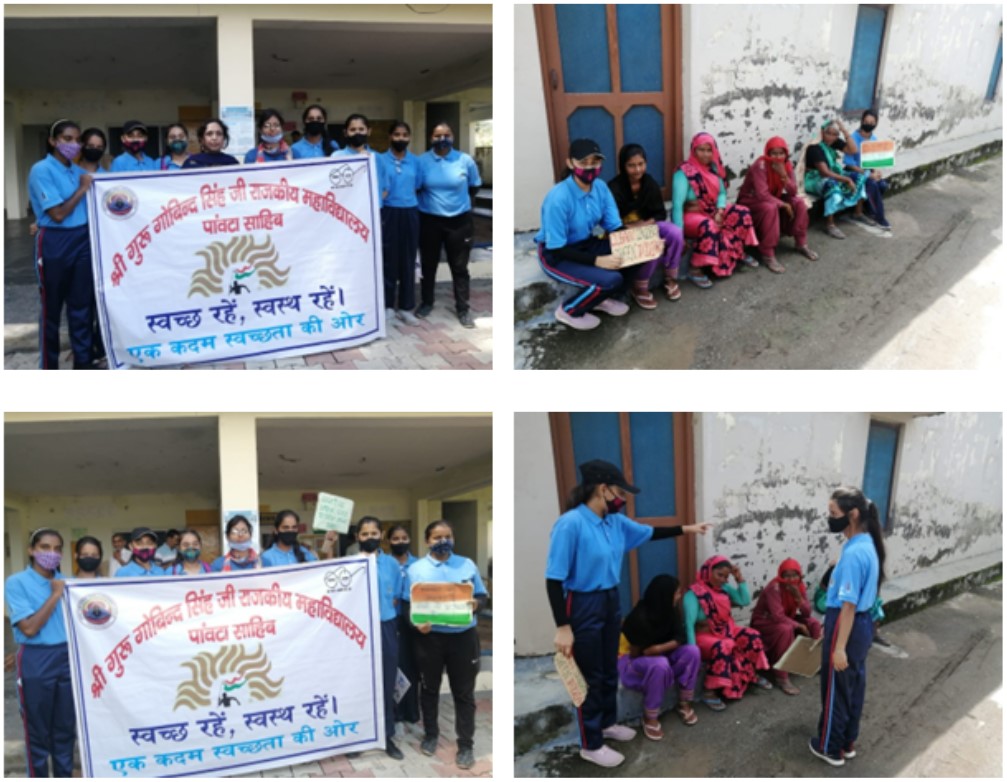 One Day Self Defence training programme on 12th October, 2021

NCC cadets participated and got trained by Trainer Mr. Tiger and received certificates. 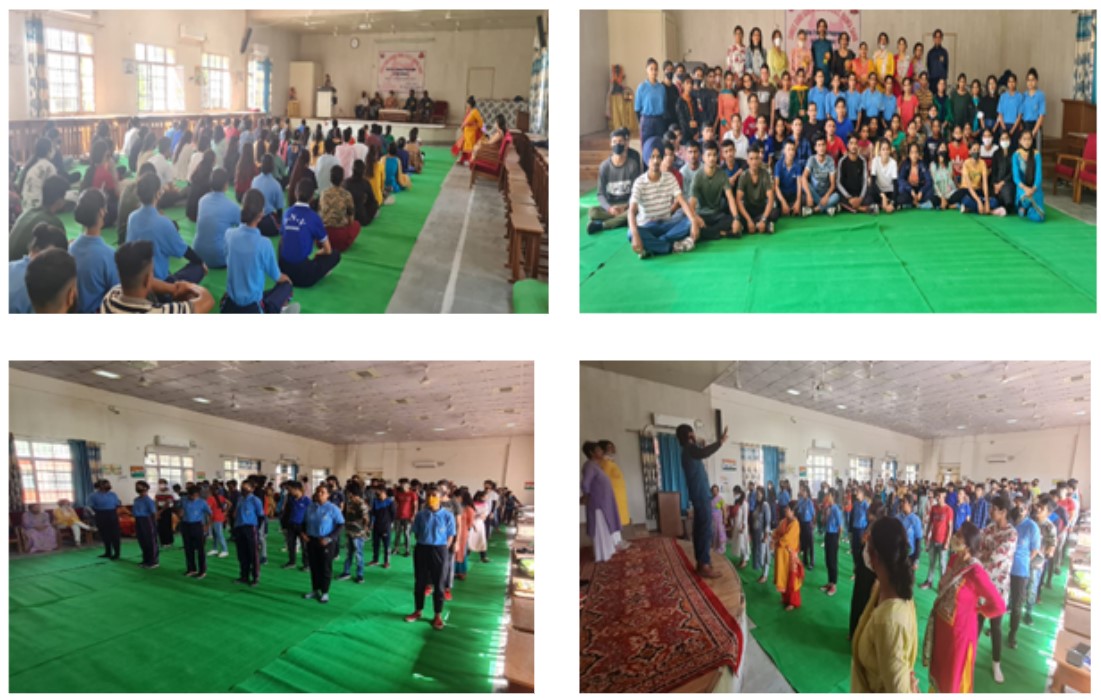 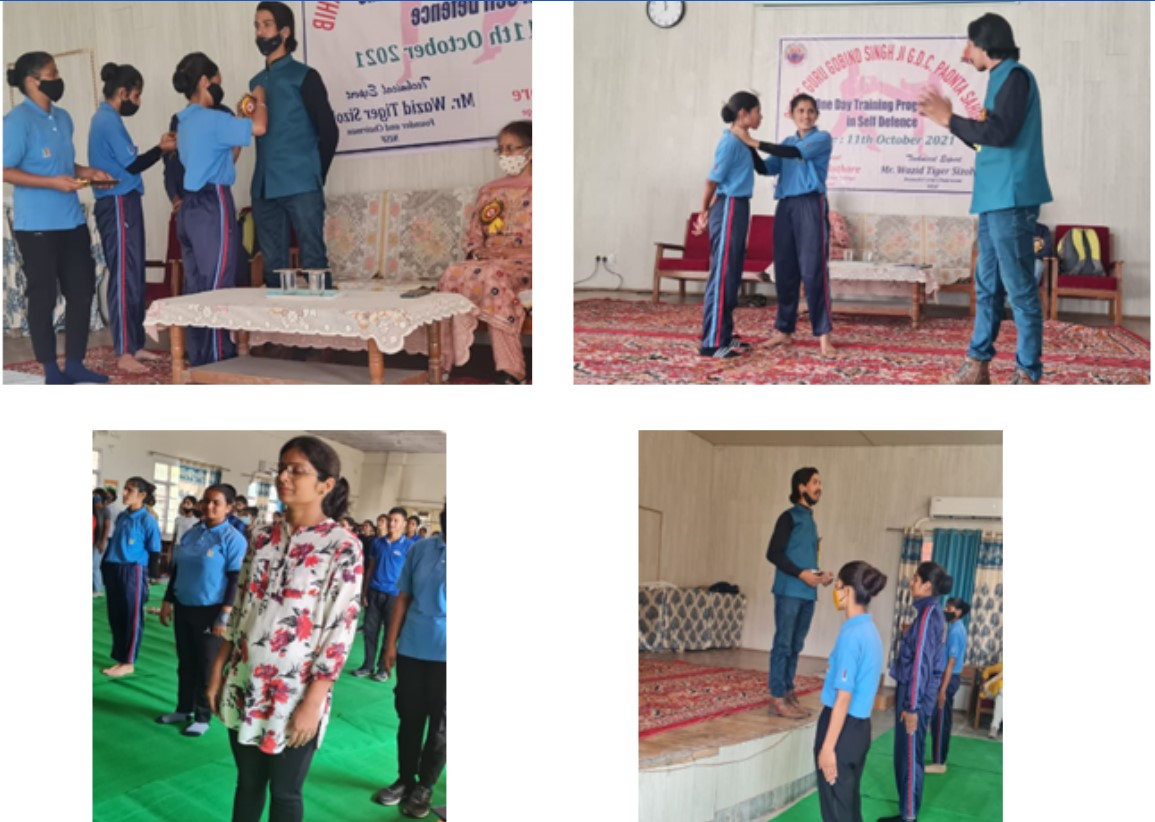 NCC cadets assisted the successful conduction of the cricket tournament and were given medal for the same by the college.

NCC cadets participated in One Day Self Defence Training Programme by the courtesy of Superintendent of Police, District Sirmour, Nahan. 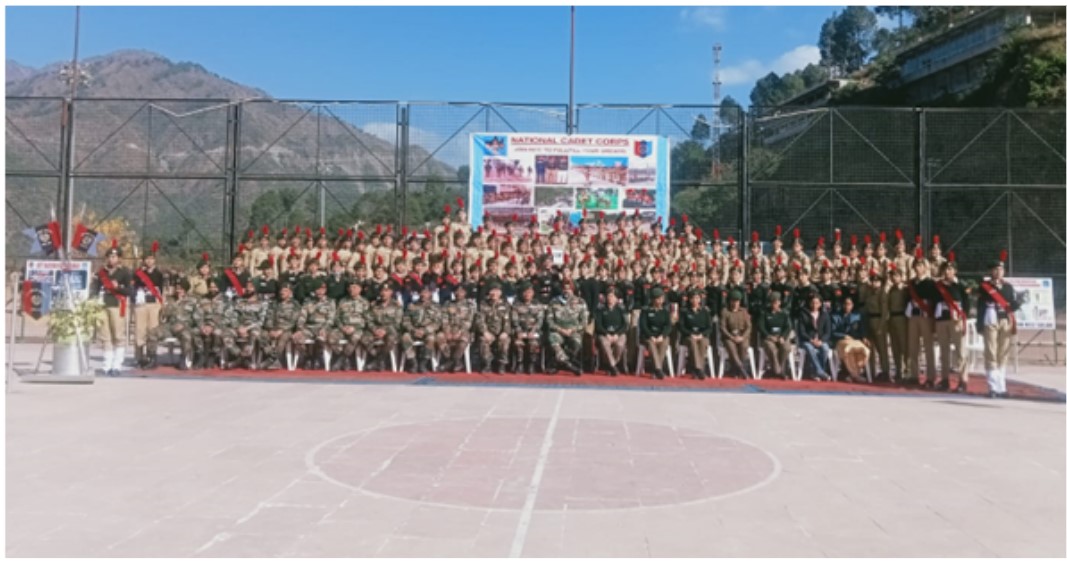 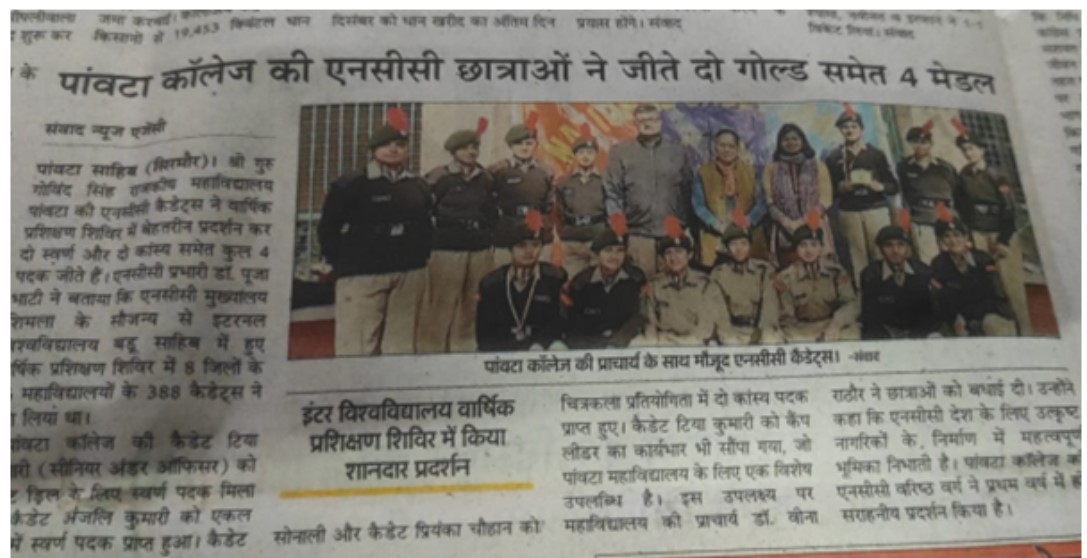 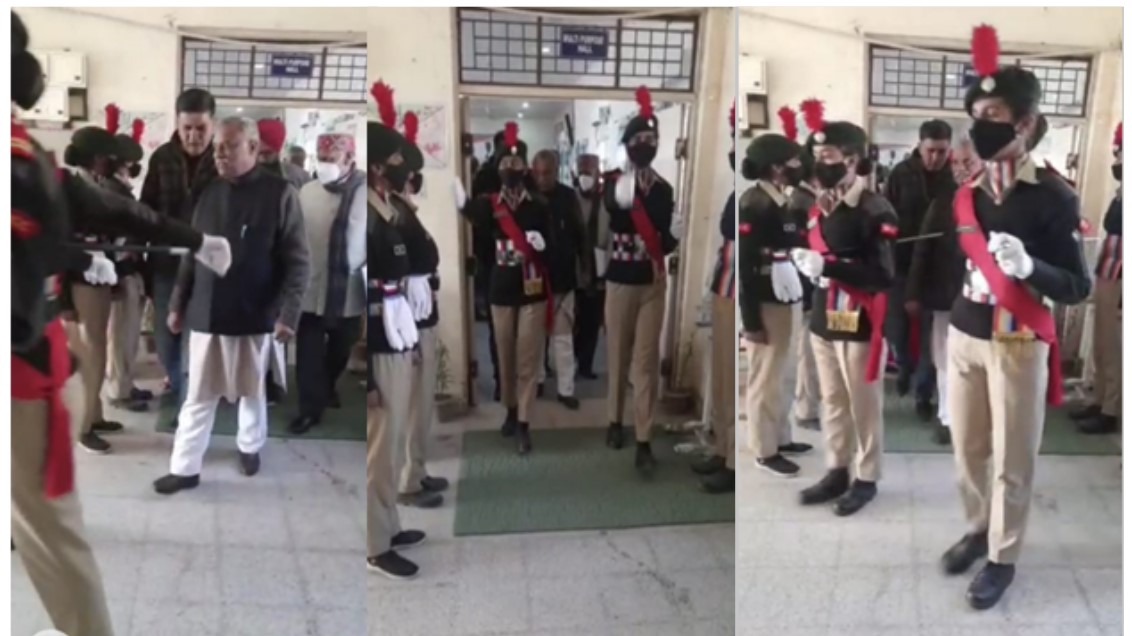 Republic Day Program on 26th January 2022
The NCC cadets represented the college in Parade and Naati Dance in the Republic Day Celebration conducted at the administrative level in Paonta Sahib. 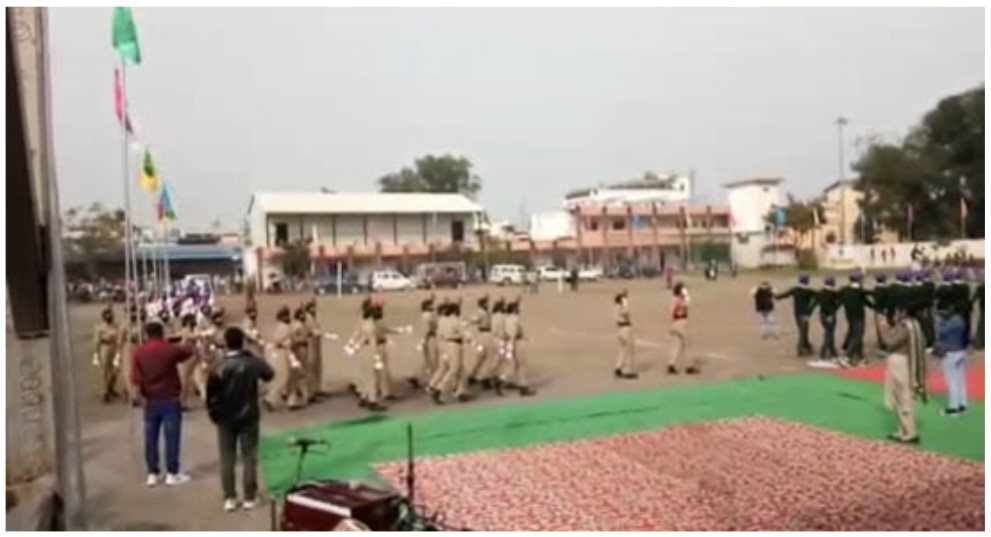 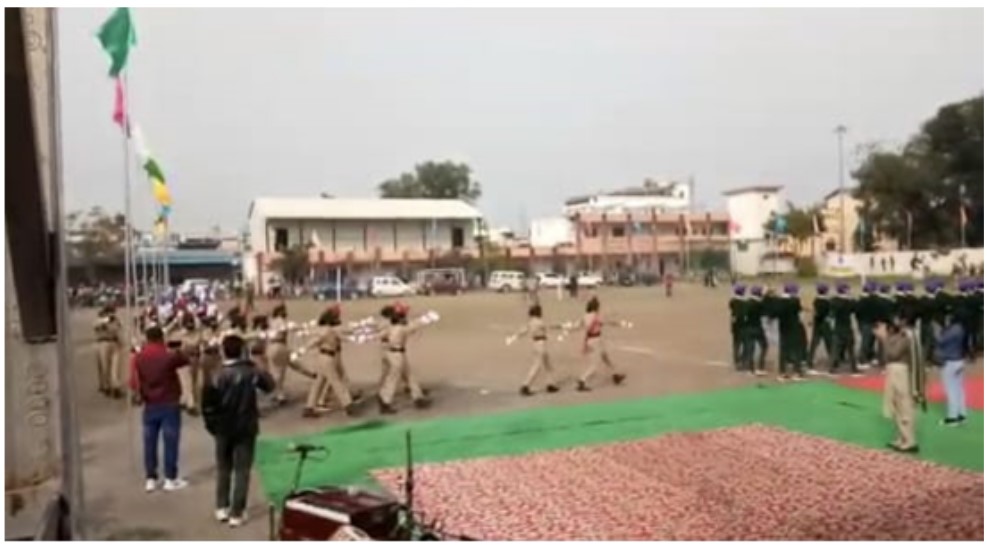 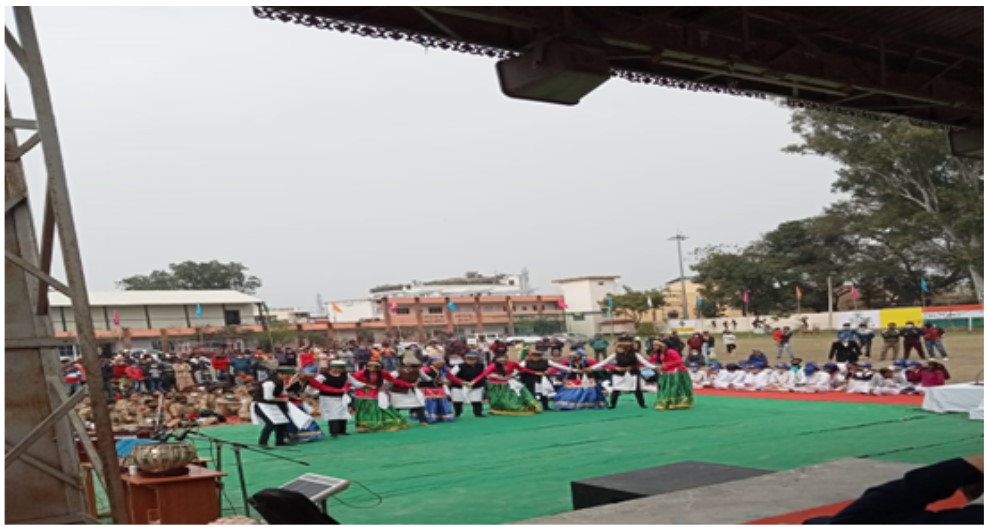